Last Friday, I did a presentation to a group of medium businesses. The audience was about 20 IT directors of businesses between 100 and 500 employees (Medium Businesses . A first presentation was made by another presenter about Open Source in general : basic principles, licence/freedom, ecosystem,  business model. As a consequence, we could say that Free Libre and Open Source Software (FLOSS) was introduced before my talk.

Every organization in the room use FLOSS. 90% of them ran some kind of FLOSS and were aware of it : Asterisk, Apache, CMS, etc. 10% used some kind of appliance or third-party (SaaS) with FLOSS inside.

My presentation was articulated around different business cases / success story. In each case, the initial business goal was stated :
The reception from the audience was great and several questions/objections were mentioned. If you attended the conference, you'll noticed that the form has been modified but, hopefully, not the content !

Challenges for Open Source in the Medium Business market


Transition from a vendor market to buyer market

I think this was the biggest objection. It can be explained this way : "While I have vendors calling me all day long and pushing me new product and services, nobody is marketing open source..."

In a sense, I think that Open Source companies operate on a much more leaner business model than the closed source one and that marketing/sales is not in their ADN and is not their priority. On another level, Open Source companies can be seen as start-up/immature companies compared to some of the players in the IT market that exists since 20+ years with an established sales, marketing and partner management department.

My answer was that Open Source is essentially a buyer market, not a vendor market. If you want to select an open source software, you can certainly find between 10 and more than 1000 open source product depending on what you are looking for (ex: a Web Server, a CMS, etc.). As a consequence, you have to define your need carefully, select one or several open source solution and then evaluate the maturity of the solution.

In a sense, it is a very different experience than buying a proprietary product or even more easily done, fill a PO and acquire a new proprietary solution from you existing supplier...

As always, I think that all those problems are great opportunities : how can Open Source company embrace those problems and provide a better service to the medium business market ? How to lower the barrier so that FLOSS can become mainstream ?

Do you have similar experience about medium businesses and FLOSS ?
Published by Unknown at 23:02 10 comments:

The end of the (Linux) desktop as we know it ?

More and more of the Linux ecosystem (PC hardware vendor, phone hardware vendor, search engine giant and more recently a well known Linux distro, Ubuntu) uses Linux as an embedded system for the desktop. Some examples to illustrate this trend :

Major desktop environment (Gnome, KDE) : things of the past ?

One interesting Linux specificity is the fragmentation of the windows manager market. No other "mainstream" operating system has such a complexity : the window manager is unique and completely integrated (from kernel to applications) into the Operating system. Thanks to the XFree standardization, Linux is more complex : several window managers exist and have to co-exist.

However, on this level, things are changing rapidly :

Negative impacts for the (Linux) desktop

This will not be an easy task as lot of flame-wars and ego-wars will have to be resolved : the feud between the different windows manager is long-lasting and not really decreasing. Key projects like Freedesktop are very important in this regard.

Major players created their own "non-desktop environment" to provide a zen-minimal environment that contain a browser and some additional technologies (video-conferencing, etc.). Those players decisions should be a serious wake-up call for the window managers : a major hardware manufacturer, google, an open-source friendly distribution editor (Canonical with the recent Unity announce) decided to create their own "desktop" environment. Those products will be delivered to millions of users...

At a certain level, one can say that the battle is already lost : the current desktop environments can not really fight this war as they don't own the key technology : the browser. As a consequence, the risk, for them (Gnome, KDE, etc.) is to be a tool that will launch a browser. A (relatively) simple tool that can be easily changed with almost no user impact...
Published by Unknown at 23:39 21 comments:

The Cloud : at least an environment that favor open-source !

What is the cloud ... without its marketing tag ?

During the 2010 think tank in Napa, the cloud was very present. One of the question was about the "threat" that the cloud represents for Open Source. This is funny because some very well in informed participants mention some key statistics. The major player in the cloud field, namely Amazon and Google, run an open-source (linux based) solution for their cloud.

Some unofficial statistics mention that more than 90% of Amazon EC2 instances run ... Linux. At some point, one could define the cloud as an Open Source OS + Open Source virtualization.

Price of a computing cycle, bandwidth, RAM and storage are going down because of various factors including Moore's law (processors, memory) and unprecedented market size increase : developing countries are now entering in the digital age and crossing the digital divide.

An old open-source theory stated that, when the cost of a computer will reach 250$ then Open Source software will be in a strong position because it will be very difficult to pay hundred of dollars for ... software (was not able to find the reference but this is not my theory, feel free to comment and I will correct this blog entry).

I think that Open Source allows the cloud to exists : as the cost of servers get under 2500$ (lets assume that a server can be used by 10 users, we will find the same kind of ratio as for the initial prediction). In this context, when you manage 100 000s of servers, should you pay for ... operating system ? virtualization layer ? etc. In fact, most of the cloud players (Google, Facebook, Amazon, etc.), as start-ups, rely exclusively on open source. Constraint drive innovation and I really think that the present scale of those companies is a direct consequence of their platform choice : using any type of closed source software would have hurt the control on their platform and kill any innovation in the egg.

From and end-user point of view, the number one OS vendor (Microsoft) adapted itself to the cloud in a very reactive mode. In order to use a proprietary system in the cloud, you have to pay an extra 10c/hours/EC2 instance. If you use 100000s of hours, should you pay this tax ? Should you port your cloud-software to ... Linux ? At a certain level, RedHat and other licence-based commercial distros have the same problems : they have to somehow "rent" you your licence so that you can use them on the cloud. Once again, why pay for this and not use ... a freer distro like Debian or Ubuntu or even Fedora, CentOS or OpenSuse ? As a customer, no doubt you will consider alternatives and cost/benefits as it


What of the dominant players ?

While there is different players, I will concentrate on Amazon as Amazon is clearly in the leadership position : they published the API and offer a multi-tenant cloud infrastructure that is very cheap and very ... scalable. Scalability is not the problem of the user anymore at least from a hardware, storage and bandwidth point of view. However, applications scalability on the cloud is a very young and immature science ;-)
The EC2 API is in the process of becoming a de-facto standard and most of the cloud provider build their solution on top of this API. Others, like Eucalyptus, re-implement the API with a different toolbox (i.e. : other virtualization technologies) and as an open-source : you can have your own private cloud on your servers.


The Cloud : at least an environment that favor open-source !

If you look at the proprietary/closed-source/traditional licence-based business model they have to adapt to the cloud and somehow switch from a multi-instance architecture to a multi-tenant one. They also have to switch from a per-user licence to a per-usage model.  This involves all kind of interesting gymnastic like the one Microsoft did : 10c/hour/instance. If you "rent" an instance for one year, your cost for MS Windows in the cloud is .10$*24*365 = 876$. Very expensive IMHO : they don't really believe in the cloud. If you are doing the math, you better buy a bunch of  server licences that includes 5 VM : this will be way cheaper. 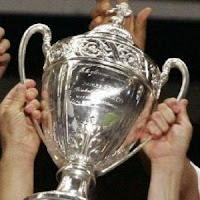 On the other hand there is no cost involved and no change required to any open-source software is you want to run it on the cloud : just do it ! No licence change, no hassle, almost no difference from a regular deployment in your data-center, no supplier to contact and ask "if you can run it on the cloud/how you can run it, etc.", no special provisioning (to have your precious licence number for each instance or to connect your licence server to your instances).

Moreover, open-source companies that develop open-source software already have a business model that is compatible with the Cloud : their software is already freely downloadable and can be run on any computer. When the old license-based model is used then some adaptation on the business sides of things, for instance usage based vs instance based. When a service-model is used, then no change is needed.

This can be a great opportunity for Open Source : a virgin territory without any legacy players and a business advantage because there is no need to change the existing software to benefit from this new market...
Published by Unknown at 22:49 4 comments:

Switch : When change is hard. A change management book ! 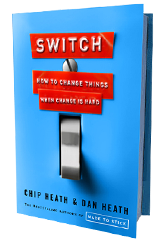 Another book about change management could certainly be your reaction when reading this review. The Heath brothers are well known for the bestseller "Made to stick". In "Made to stick" (this is a recommended reading ;-), the emphasis is psychological and human centric : this is a (vulgarized) psychological book that propose a model for human mind : rational mind and emotional mind. I think this is important to mention because "Switch" is compatible with this psychological model and both books work well together.
Change : if was easy, it would already be done ! 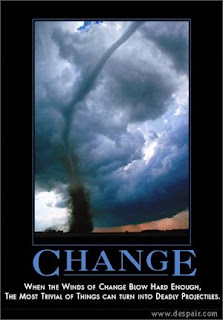 Change is, by definition, hard. If it was not the case then ... it would already be done. As a consequence, the second part of the title is somehow redundant but that is certainly a good marketing coup ;-) The second part of the title has at least one virtue : it explains clearly what he book is about "How to change when change is hard". I've read in an unidentified source (don't remember!) that the greater the success, the harder the change.
Read more »
Published by Unknown at 22:03 1 comment: